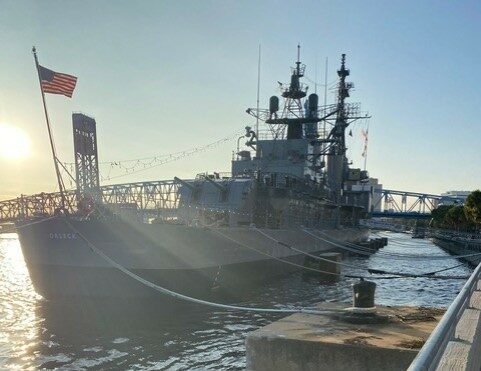 Soiree on the USS Orleck in downtown Jacksonville, FL November 29, 2022

A soiree to honor veterans was hosted on board the historical warship, the USS Orleck, by the Jacksonville Naval Museum. President of the Museum, Daniel Bean, was His passion for the destroyer is clearly seen on the tour he provided for the attendees.

The USS Orleck, the most decorated post-World War II ship, fought in the Korean, Vietnam, and Cold War periods. It served for almost 80 years.

During the time that she saw action in Korea and Vietnam, she was the charter member of the “Train Buster Club” in Korea when she knocked out military transport trains on two different occasions and was named “Top Gun” of the Seventh Fleet in Vietnam. She was decorated many times over the years.

State notices
“A COPY OF THE OFFICIAL REGISTRATION AND FINANCIAL INFORMATION MAY BE OBTAINED FROM THE DIVISION OF CONSUMER SERVICES BY CALLING TOLL-FREE (800-435-7352) WITHIN THE STATE. REGISTRATION DOES NOT IMPLY ENDORSEMENT, APPROVAL, OR RECOMMENDATION BY THE STATE.” Tax ID #26-2016374 Registration #CH33884